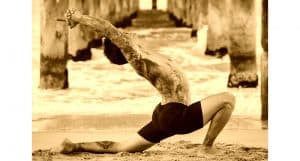 Ashtanga Yoga comes from a genealogy, of about five thousand years ago, comprising mainly wise teachers and gurus, reaching milliions of practitioners, through Sri K Pattabhi Jois’ life, who passed away on May 18, 2009. Today Ashtanga Yoga is passed down by his son, Manju Pattabhi Jois, his daughter Saraswati, his grandson Sharrath Rangaswarmy and also by every teacher and practitioner worldwide.

Ashtanga led classes;meaning that a teacher leads the class and instructs students in the order of the poses, usually in the primary or secondary series.

Once students know the order of poses very well, they may often opt for self-led, or Mysore style practice. This is an opportunity for students to practice at their own pace and level of ability, but in the company of other students and with the encouragement and advice of a teacher, as needed. Ashtanga can be an ideal foundation for home practitioners once they know the sequence of poses.

Ashtanga Yoga uses a triplefold system called Tristana. It consists of the right breathing (Ujjayi pranayama), the asanas (including the right use of bandhas and the exact point of gaze, dristhi). This methodology helps the practitioner to develop a meditation controling his thoughts, emotions and vital functions.

The prefix “ud” means upwards, uplifting or expansion. It also has the meaning of supremacy and power. “Jaya” means conquest or success and from another perspective self retainment. In ujjayi pranayama the lungs are fully expanding, with the chest put forward like a warrior. The breath is the key for the kingdom of serenity and power, and along with it we can regulate our nervous system. The breath is the gate between the body and mind, the portal between meditation and practice, and often the first step on the way to a more spiritual and conscious, thus happy life. Guruji used to say “Ashtanga is a breathing practice, the rest are simple stretching”

There are three groups of asana sequencies and six series in total. The first series, yoga Chikitsa, cleanses and regulates thw physical body. The intermediate series, Nadi Shodhana, cleanses the nervous system, opening more sublte energy sources and the mind. The Advanced series A, B, C and D Sthira Bhaga, literally means strength and grace, which provides further mental power, demanding extreme levels of dedication, determination, and modesty of the practitioner. This practice works accumulatively and it is imperative that the sequence of asanas is followed, due to the building effect of the system. The consecutive procedure of learning Ashtanga Yoga allows the practitioner to develop the muscle strength and elasticity, and the mental concentration and stamina required for progressing in a safe and balanced way.

The bandhas are “locks” in our physical body, which activate with a light contraction of the muscles of the corresponding area, and are directly connected with our energy flow. By name the Moolabandha, Uddiyanabandha and Jalandarabandha are found in the pelvis area, in the belly button area (two fingers below) and in the thyroid area correspondingly. Their activation maintains the right alignment of the body, providing at the same time a deep point of concentration for the mind.

Using our vision organs we succeed in focusing our brain on one point creating a more internal and meditative practice. The dristhi (gaze focus) helps our mind and our senses to be directed to the inside of our physical body.

The yoga practice consists of a total of techniques like, “exercises” (asanas), breathing techniques (pranayama), focusing exercises, meditation, all of which need several hours to be practiced.

Vinyasa is a system that organises the practice in kinetic sequences, fully synchronised with the breathing. With the addition of bandhas along with a specific gaze point, the benefits are reinforced, comprising a complete set of exercising the body and mind. The creator of this technique was Rishi Vamana.

The main idea of vinyasa is to draw the attention of the mind, from the position to breathing, enabling the practitioner to realise that the positions (asanas) as well as all shapes and forms, are temporary. All shapes, objects, structures come and go. Yoga seeks the shapeless, the intangible (conscience).

Vinyasa yoga is a meditation on the impermanence and the only thing settled in the practice, is breathing, whereby the asanas form a mala (rosary). The mala is mainly used for counting the mantras, during meditation. In vinyasa every asana is a different mantra, and the movements that we perform to enter and exit the asana are beads that form the mala (rosary), so the practice becomes a moving meditation.

The creation of the heat burns toxins not only the physical ones, but also the poison of ignorance and self dillussion. When each asana is performed separately, it may lead to extensive elasticity, which destabilises the body. The correct alignment of the bones and especially of the spine is succeeded by maintaining a specific muscle tone.

The Vinyasa method with the continuous opposing movements (jump forward, asana, jump backwards) enables us to gain strength so as to maintain the elasticity gained from the asanas. At this point it is imperative to point out that the kind of elasticity which cannot be supported by strength, should be avoided.

The eight steps are divided into two parts – the first five are called external limbs, they are: Yama (suggestions for social behaviour: non-aggression, truthfulness, non-theft, appropriate sexual behaviour and non-greed), Niyama (suggestions for personal disciplines: self purification, contentment, self-discipline, self-study and surrender to the ideal of yoga), Asana (physical postures), Pranayama (breathing exercises) and Pratyahara (sense withdrawal).
The three “internal” limbs are Dharana (single pointed concentration), Dhyana (meditation) and Samadhi (the state of yoga in which the ultimate truth is experienced). Once the five “external” limbs have been mastered, the internal limbs start to unfold naturally.

The first two parts of Ashtanga Yoga (Yama and Niyama) are very difficult. Complete non-violence which is the first of the Yamas is in fact almost impossible. Truthfulness in conjunction with non-violence is also very difficult. Therefore the practice of asana (physical postures) is suggested first. The asanas help to strengthen the body and clarify the mind so that moral development is easier.

“They (yama and niyama) are very difficult. If you have a weak mind and a weak body, you have weak principles. The yamas have five limbs: ahimsa (non-violence), satya (truthfulness), asteya (non-stealing), brahmacharya (continence), and aparigraha (non-possessiveness). Ahimsa is impossible; also telling the truth is very difficult. The scriptures say speak that truth which is sweet; don’t speak the truth which hurts. But don’t lie, no matter how sweet it sounds. Very difficult….That’s why you build a good foundation with asana and pranayama, so the body and mind and nervous system are all working; then you work on ahimsa, satya and the other yamas and niyamas.”*

So the physical postures create a stable foundation for pursuing the other aspects of yoga. They return the practitioner to good health and eliminate the distractions caused by disease and an unstable mind.

As one begins to practice yoga, one sees that the eight steps are not, in fact separated or sequential, but are integrated. With the practice of physical postures one becomes mindful of the necessity of the yamas and niyamas, one begins to control the vital energy, the senses turn inward, concentration improves, states of meditation and bliss spontaneously occur.